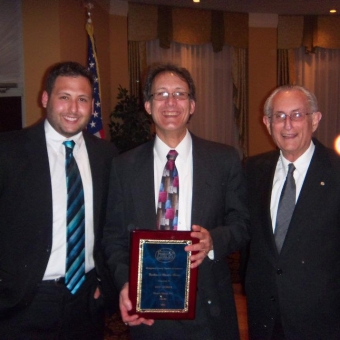 The Homer Group awarded for Excellence in Chamber Service

The Homer Group is proud to accept the 2012 Excellence in Chamber Service award from the Montgomery County Chamber of Commerce.

On April 18, 2012, The Montgomery County Chamber of Commerce held its annual Celebrate of Excellence Awards Banquet at The Plymouth Country Club. The Homer Group received the award for Excellence in Chamber Service, recognizing the service and dedication provided by three generations of Homers to the Chamber of Commerce and its business community.

Below is the copy of the speech presented by Guy Homer on behalf of the family:

For the past 50 years, my family has not just conducted business throughout Montgomery County, but has been dedicated to community involvement and strengthening business associations.  With that in mind, it’s a great honor to stand before you this evening, on behalf of Bernie Homer, Kevin Homer, and myself, and accept the 2012 Excellence in Chamber Service award.

Bernie brought The Homer Group, which at the time was called Homer Photo Labs, to King of Prussia back in the 1960s.  In interest of time, I’ll skip ahead in my walk down memory lane to January of 1982, when after serving on the Board of Directors for seven years, Bernie Homer became president of the Greater Valley Forge Chamber of Commerce, and his Vice President was Al Paschall.  Some highlights of his term as President include increased membership, the procurement of road repairs on the Schuylkill Expressway, the implementation of the Chamber’s annual Crime Prevention and Law Enforcement program called “Invest-In-A-Cop” Campaign, and enhanced communications within the Chamber.

In 1985, as Chairman of the Montgomery County Private Industry Council, Bernie worked closely with the Advanced Technology Center of Southeastern Pennsylvania and was a driving force in using technology to impact productivity and profitability for businesses in the region.

In 1986, three years after I joined my father in the family business (at that point, called The Homer Printing Company), Bernie and I were both Directors of the King of Prussia Chamber of Commerce at Valley Forge, and we remained Directors until 2006.

In 2002, Bernie and I were presented the Kenneth R. Taylor Award for Excellence in Service for the King of Prussia Chamber of Commerce at Valley Forge. Today, I am still active in the Chamber and serve on the Membership Committee.

Fast forward to present day, and here we are, now 3 generations of Homers together.  Kevin joined the family business, now called The Homer Group, in 2008, and helped us evolve into the full-service marketing agency that we are today.  Keeping the family tradition of community involvement in mind, Kevin joined the Montgomery County Chamber of Commerce and has been instrumental in bringing the Young Professionals Suburban Network back to the Chamber, and is the co-chair of the committee.  Kevin also serves as the President of Greater Norristown Corporation and Vice President of Norristown Arts Hill.

We’re proud of the involvement that we, as a business and as a family, have had with local organizations over the years:  Rotary Club of King of Prussia, Montgomery County 4-H, King of Prussia Kiwanis, Associated Builders & Contractors, GVF Transportation Management Association, Greater Norristown Corporation, Norristown Arts Hill, and of course, the Chamber of Commerce.  Additionally, I am a Mason, and my father is both a Mason and a Shriner.

Next year, The Homer Group will have its 50 year anniversary.  Our 50-year history has included the company’s inception as a photo finisher, evolving to a black and white copy center, then to a printing and graphic design company, to the full-service marketing agency that it is today.  We believe that the innovation and business development opportunities that we’ve had would not have been possible without the relationships we’ve built along the way with our local businesses, local governments, local organizations, and local community. The Chamber of Commerce has been an incredible resource and provided such tremendous opportunities to us over the years, and as we approach our 50th anniversary, we thank the Chamber for its role in our success.  It’s an honor to stand before you today and accept the 2012 Excellence in Chamber Service award.